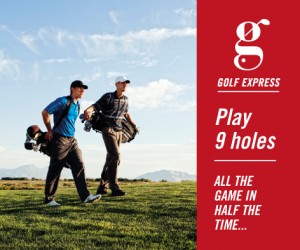 The launch of Golf Express, which promotes 9-hole golf to inspire busy people to play more often, follows a successful eight-month trial in Staffordshire when over 4600 9-hole rounds were played.

Now clubs across the country are invited to join the campaign and promote 9-hole green fees and offers to players on the GolfExpress9.org website.

Justin Rose, an England Golf ambassador, often plays 9 holes in practice and describes Golf Express as: “A great way to play all the game in half the time.”

On average, a 9-hole round can be played in just two hours, which can fit into a busy lifestyle, and it offers all the health and social benefits of the full game. In a 9-hole round a player will walk two to three miles, take over 5000 steps and burn over 450 calories.

The appeal of the 9-hole game, which is compatible with the Rules of Golf and the handicap system, has also prompted the R&A to launch a new 9-hole championship for amateurs and Scottish Golf is also promoting the shorter format.

To mark the national launch of Golf Express, England Golf has re-imagined the results of the Major championships of the past five years to find out how they would differ if played over 9 holes.

England Golf’s Club Services and Development Director Richard Flint said: “This research shines a light on the 9-hole game and I hope it encourages more people to get into golf.”

Golf Express offers places to play across the country through its online directory at www.golfexpress9.org which also features special offers. Golf clubs are invited to upload their offers via http://www.englandgolf.org/clubhouse and to take advantage of packs of marketing materials.
Follow GolfExpresss on Twitter: http://www.twitter.com/golfexpress9
Like Golf Express on Facebook: www.facebook.com/golfexpress9 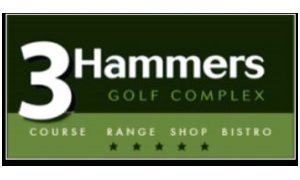 A renowned West Midlands based Golf Complex, which gave over 3,000 youngsters a pathway into golf, has achieved national recognition, celebrating their success in spectacular style by flying the staff by helicopter to a star studded event at Wentworth to collect their award.

3 Hammers Golf Complex, Wolverhampton have been honoured by winning the prestigious Critchley award from the Golf Foundation where they shone above all competition in recognition of their significant impact in the development of grass roots junior golf – testament that golf is not in decline as is often reported. In fact, 3 Hammers continues to go from strength to strength and their proven successful formula is now recognised as a national example of good practice by the EGU, PGA and Golf Foundation.

The Awards celebrate some of the excellent people who work at the grass roots of the game and the high achieving projects which encourage more people to find their way into golf. The Critchley Award, one of eight President’s Awards is given to the heroes of grassroots junior golf and has been awarded to 3 Hammers.

The Complex, supported by England Golf and the Golf Foundation, involves their 5 full time PGA Golf Professionals and two level 1 coaches to run Tri-Golf and Junior Golf Passport sessions in local primary and secondary schools, colleges, universities and groups across the region such as girl guides and scouts. The coaching then continues
through the Player and Elite levels at the Complex’s unique facilities in Coven, Wolverhampton.

The Complex’s Golf Academy, one of the largest in the region, stands head and shoulders amongst other golfing venues across the UK. The Critchley Award represents the outstanding work they have carried out in the community developing a successful pathway from school to golfer. This Golf Foundation award highlights golfing venues
across the country recognising their outstanding achievements with junior golfers. All award winners support the Golf Foundation’s purpose to make golf and its benefits available to young people and help them ‘Start, Learn and Stay’ in the game.

Rob Bluck, 3 Hammers Golf Academy Director, said “The Presidents’ Awards represent a unique opportunity for us to showcase our passion, commitment and hard work inspiring young golfers and growing the game of golf.  We are always delighted with the progress and enthusiasm of our juniors from ages 4 up to 16, with over 20 of our students having gone on to become Golf Professionals themselves. It’s a hugely rewarding part of what we do here at 3 Hammers and we’re delighted to be recognised with such a coveted award.”

Joined by excited crowds including some of their Ladies Love Golf members, the Complex celebrated the prestigious occasion by landing a helicopter on their driving range to fly the Golf Academy team and two lucky junior golfers in luxury style down to Wentworth where they collected the award in front of a packed audience of golfing greats and top celebrities.

Two of 3 Hammers brightest stars Will Dunn, Junior Captain and Harrison Worley, Junior Vice Captain were invited by the Complex to join them at the Presidents’ Awards on 25th May 2016 at Wentworth, the same time as the BMW PGA Championship Celebrity Pro-Am. Held courtesy of one of the Foundation’s chief supporters, The European Tour, and Wentworth Club, it’s always a glittering occasion attended by some of golf’s most
influential figures.

Acting mentors for all the budding junior golfers at the Complex, the trip saw Will and Harrison rubbing shoulders with A-list celebrities and golfing greats including Masters winner Danny Willet, Justin Rose, Lee Westwood and Trevor Immelman.

Will, from Staffordshire, is a prime example of the Complex’s success with junior golfers. From aged 6, Will flourished through their junior golf programmes, and now aged 17, is juggling the demands of A-Levels with his aspiring golfing career. With a handicap of just 6, Will plays at County level and is already a PGA level 1 Professional. Currently working hard at his A-Levels, his next step is a Golf Degree at Birmingham University. In fact, he took his A-Level Maths exam on the morning before hopping into the helicopter at 3 Hammers to fly first class down to Wentworth with his coaches.

Harrison Worley was the other lucky young 3 Hammers junior to be chosen for the once in a lifetime trip. Now aged 14, Harrison started playing golf at the Complex aged just 5 and has proceeded through the junior golf ranks. The talented youngster was allowed the day off school to attend the event. But Harrison takes such events in his stride as, in a couple of weeks, he will be heading up to Scotland to compete in the European Boys Championship.

The now national award winning Complex ran junior programmes involving over 3,000 youngsters, 42 per cent of whom were girls. Pupils receive follow-on coaching right up to their teenage years with many youngsters joining local golf clubs as junior members as a result.

In recent years the Complex have expanded their facilities to enable the teaching of golf to juniors on a much wider scale with the design and commission of a purpose built Learn 2 Play Zone, the first of its kind in the UK. At over 10,000sqft the Zone is fully netted, astro turfed with synthetic putting green and an undercover pavilion.

They are also continuing with an impressive £250,000 investment project including upgrading their 20 bay driving range with the latest automatic power tees and further investment on their esteemed golf course – making it even more accessible for beginners, juniors and golfers of all standards.

Complex Owner Ian Bonser said “3 Hammers continues to go from strength to strength. It’s a prestigious award and recognises us on a national scale as the best in the UK for our hugely successful junior coaching programmes for over 3,000 kids across the region over the past year. This in turn helps to benefit local golf clubs as the juniors progress and helping to grow the game. Going forward, this accolade encourages new people within the area to take up the sport confident in the abilities of our 5, now national award winning, PGA Golf Professionals. We intend to do even better in the year to come”.

Players named for Dutch U21 championship

Hilleard will be joined by Matthew Jordan of Cheshire and Gian-Marco Petrozzi of Staffordshire to compete for the U21 title.

Josh Hilleard, 21, (Farrington Park), won the West of England Championship, the Berkhamsted Trophy, the Faldo Series Wales Championship and the Hampshire Salver in April. He was joint top-scorer when England beat France at Formby and was also in England’s winning team at the Costa Ballena Quadrangular Tournament.

Matthew Jordan, 20, (Royal Liverpool) was fourth in the Irish stroke play, sixth in the Duncan Putter in Wales and had top 20 finishes in the Scottish and Welsh stroke play championships. Earlier in the season he won the Hampshire Hog and tied third in the Hampshire Salver.

Gian-Marco Petrozzi, 19, (Trentham) reached the Amateur Championship matchplay and was fourth in the Brabazon Trophy, where he shot the championship low score of seven-under 65 in the final round. He also tied third in both the Hampshire Salver and the Duncan Putter and was 10th in the Lytham Trophy.