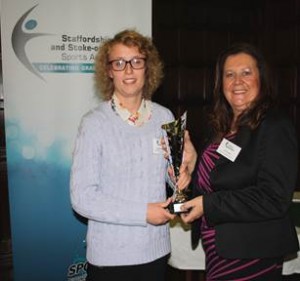 Dani Pointon (19) has been named the West Midlands Sportivate Participant of the Year in recognition of her contribution and outstanding commitment to sport. Sportivate, a Sport England funded programme, encourages young people who are not particularly sporty get active.

Having overcome so many obstacles to taking part, Dani completed introductory coaching sessions at a Girls Multi-sport session at Silverdale Youth Centre, Newcastle under Lyme, and is now taking part regularly when she is physically able, and volunteering at sessions such as Bradwell Belles FC. Dani has become a real positive role model for other young women in similar situations. She has also gained a Level 1 sports Leader and football coach, Level 2 Doorstep sports Coach and first aid.

Ben Rigby director at Sporting Communities which runs the sessions said “Dani is an absolute star. Even when she is not able to participate Dani will be at sessions encouraging other girls. She has an infectious personality and just brings a smile to everyone’s face. I can’t believe how far she has come.” The Sportivate sessions were multi-sport sessions at Silverdale Youth Centre and very informal, specifically targeting girls like Dani. We helped her find the passion she once had for sport and reignite an enthusiasm that is contagious to other’s at the sessions. She’d been keen on sport when younger but had dropped out due to medical reasons and previous experiences within football. She wasn’t involved in a club and only participated infrequently. 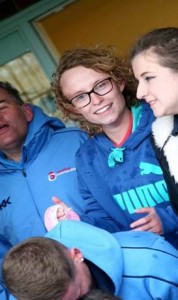 She now regularly participates, when she is physically able, and volunteers at local clubs such as Bradwell Belles FC to inspire more girls to enjoy sport. She has gained Level 1 sports leader and football coach, Level 2 Doorstep Sport coach, 1st aid and more.

Without the Sportivate programme, Dani admits she may never have had the courage to get back into sport. She now has great confidence and is always helping out with projects within her local community.